Forty-three years ago the first Earth Day was celebrated.

It was a crisp, clean spring morning in Southern California.  I was a freshman struggling to get used to the (much) bigger campus and student body.  Because I lived a couple blocks inside a different high school district, all my Jr. High friends were at a rival High School.  However, I was slowly making new friends and we had arranged to meet out in front on Earth Day.

Many students celebrated Earth Day by riding bicycles, carpooling, or riding the bus to school.  I already rode the bus (I didn’t have a bike, boo-hoo!), so not much of a celebration there.  But on campus there were rallies and speeches and many groups had put up brightly colored posters in honor of the day.   Excitement crackled in the air as hundreds of kids arrived.

Since the bus I rode arrived just before the start of the school day, there was not much time for me to enjoy or participate in many of the activities that morning.  But standing out front, the thing I remember most was the long, long row of bicycle racks installed in front of the campus to accommodate all the bikes being ridden to school. 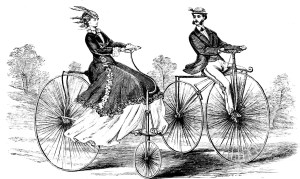 It was an impressive sight, all the dozens and dozens of bikes lined up. I admit I was wildly jealous of their owners.  Brilliantly colored frames and fenders, blindingly white handlebar grips and trim, sparkling chrome details flashing in the morning sun.  And the smiling, laughing faces of the students and, yes, even the faculty as we all got swept up in supporting a common goal.

Riding a bike to school became de rigueur for quite a while.   Then, after a while, there was one less bike rack.  A little while later, another was removed.  Later still, only a handful of racks were needed.  I still rode the bus.

But, the wheels of those bicycles had set in motion the wheels of change. We still celebrate Earth Day.  We celebrate it every day of the year when we carpool, use public transportation, walk, or yes, even when we ride a bike.

Which I finally have. (Whoo-hoo!)

This entry was posted in Garden and Home, Holiday and tagged April, Earth Day, Holiday, school, Spring. Bookmark the permalink.