Posted on September 6, 2013 by jellyonacracker

A while back I wrote about my very first cookbook here and recently I got out my first real grown-up cookbook, “The Joy of Cooking”. My grandmother sent it to me when I had my first apartment.  It got me thinking about all the cookbooks I’ve collected over the years.  I have far, far too many, but cookbooks are my one weakness. Of course, thinking about them led to looking for them, which led to getting them out from cupboards and shelves and hidey-holes, which led to spreading them all over the kitchen table and reading them. 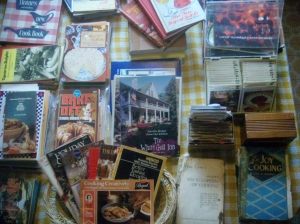 So here I’ve been sitting going through dozens and dozens of cookbooks and having a marvelous time!  There are a number of vintage cooking pamphlets that came with small appliances or as promotional give-aways.  I have quite a few church fund-raiser cookbooks that are stuffed to the gills with pot—luck supper dishes, cookies and cakes, baked beans, New England Supper dishes, and everybody’s grandma’s “best ever potato salad” recipe.  You know the kind.

I have give-away cookbooks that came from banks, department stores and such-like.  Cookbooks I got with two box tops and a check or money order.  Cookbooks written by famous chefs and not-so-famous chefs. Cookbooks from restaurants, cafes, and supermarket checkout aisles.

I think I’d have to live to be about 192 years old, cooking every meal, every day for every year before I get through them all!

That in mind, I have decided to (GASP!!) weed them out! I have finally convinced myself that weeding is good, weeding will make room for new cookbooks to treasure.  It’s hard, though, to decide which ones to part with.  I pick one up, leaf through and a little voice in my head hollers “WHAT do you think you’re doing?!  You LOVE this one!!”  And then, feeling terribly guilty for even thinking about letting it go, I quickly and quietly slip it back into the pile.  No one saw, no one noticed, not a soul knows what I did.  Except me.  And you.

Result? The books have been on the kitchen table for quite some time now. This won’t do.  Therefore, I have to come up with a Plan.  One that is brilliant in its simplicity and dazzling in its effectiveness. Otherwise, they’ll sit there forever and end up as placemats and coasters.  That won’t do, either.

In the meantime, while I ponder a Simply Dazzling Plan For Cookbook Weeding Out, I have an Etsy shop where I hope to find good homes for some of them.  I have decided that Graham Kerr will be first to go out into the world.  Graham Kerr was hugely popular in the late 1960s and early 1970s with his own televised cooking show, “The Galloping Gourmet”.  I was just a tad young for any interest in it, but my mother remembers watching him now and then.  With four ravenous children and a meat-and-potatoes husband whose tastes were not quite up to the gourmet level, she watched for entertainment.  Mostly.

A tall handsome man with a heavenly British accent, he regularly wore a suit and tie to cook in his television kitchen in front of a studio audience consisting mostly of women.  He wasn’t merely a chef, he was a performer. Hilarity was a big part of the appeal.  His food was the other.  His recipes included awesome amounts of butter or clarified butter, cream, and fat.  He imbibed a bit when a recipe included wine, and even when it didn’t, and at the end of almost every show, Graham would go into the audience and chose an audience member (a woman, more often than not) to come onstage with him and sample the finished dish. 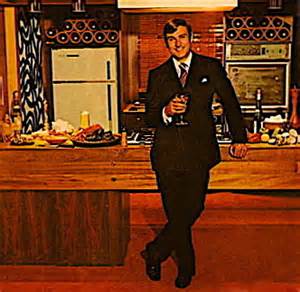 Looking at his cookbook now, filled with unusual recipes (Tarakihi Tauranga, anyone?) and photographs of him (his hands, more accurately) preparing them (while wearing the suit!), I realized that I  got it because mom had talked about his show just often enough to piqué my curiosity about The Galloping Gourmet.  My curiosity satisfied, I can let Graham go.  After one more peek…..