This weird recipe for a vegetables-jello-tomato-soup-cream-cheese-salad-mold needs a better name.  It is a recipe given to my mom by her aunt, an old-maid-schoolteacher, who couldn’t cook but who liked to tell other people how to cook, most especially if they were cooking something she was going to eat.

Mom made this quite a lot when we were all still kids at home.  None of us actually ever ate it.  Think about it…jello and tomato soup? Vegetables?!  The idea was pretty repulsive to us kids.  Add to that the fact that I could not (and still can’t) eat bell peppers because they give me heartburn.  The minced celery didn’t seem too bad an idea, but the onions and cream cheese were iffy, if you know what I mean.  Don’t forget, we were just kids, and to us this was a pretty “out there” dish.  So, mom would make it to take to potlucks or to work for sharing with grown-ups.

Fast forward a bazillion years to one morning last week.  I am doing most of the cooking for her now, so I asked if there was anything special she wanted me to make for her dinner and she handed this to me. 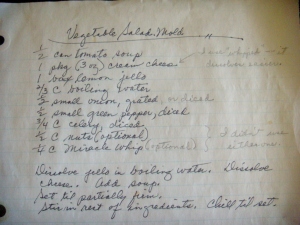 I was going to have to make the dreaded VJTSCCSM.

Gathering all the inner strength I could muster, I gathered all the ingredients,

did a bit of mincing and dicing, 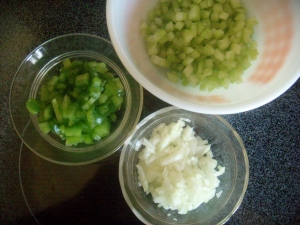 and boiled the water.

Assembling everything was all that was left to do.

Add the boiling water to the lemon Jell-o, 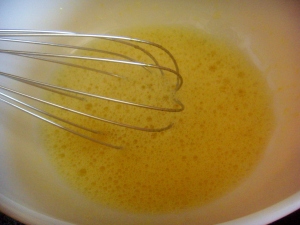 mix in the whipped cream cheese

and the tomato soup (which I forgot to get a picture of, naturally). Then chill until partially set.

Add onions and celery (at this point, I put some of the mix in a small bowl for myself), 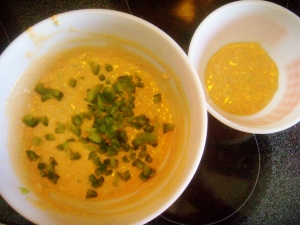 Mix well and put back into the fridge until completely set.

I have to say that after trying this without the peppers, I discovered it was not as bad as I’d led myself to believe.  It was quite good, in fact. So much so that I made a second batch a few days later just to be sure I wasn’t mistaken.

My personal little bowl without the nasty bell pepper . . .

Not bad, not bad.